It was hard getting work done during the holidays, but I have made a few advances nonetheless. As per the title, a few more papers have agreed to print my Texas Perimeter Hike column, I have read or started a few more books, and finally, I have submitted my name for an outdoor survival school scholarship.

I am pleased to announce that my hometown newspaper the Corpus Christi Caller-Times has agreed to run my future column. In a bizarre twist, my contact person is Cynthia Wilson, formerly Cynthia Arbuckle, of fame. She didn’t reveal her secret identity until the end of our first phone conversation, but I had suspected that it was her all along. In addition, I have garnered the support of the Clifton Record. To both of these papers, I thank you for your support and willingness to take a chance on me and this project.

I have also been doing some reading, both historical and fictional, going back in time to get a feeling for what once was in the different regions of . I recently finished The Captured by Scott Zesch which details the lives of abducted child settlers by Native Americans, mainly the Apache and Comanche peoples. The author’s distant uncle Adolph Korn, himself an abductee, inspired the research into what these captured children endured and the times in which they lived. Because of the perimeter hike, I became especially interested in the landscape of the Panhandle, a favorite meeting ground of the evasive warrior-nomads. The perimeter also passes within fifty miles of the farm of Dot and Banc Babb, two of the children featured in Zesch’s research. A fascinating and lively book, The Captured will have you longing for those fearsome times, which, truth be told, took place not so long ago.

I have also started both Lonesome Dove by Larry McMurtry (why, oh why, have I waited so long?) and Lone Star Nation by H.W. Brands. I am only a few pages into Lonesome Dove, but it promises to be an epic journey after my own heart. With an eye on the perimeter, I hope to rediscover the cattle trail “used” by Augustus McCrae. Lone Star Nation on the other hand is addressing history with a wonderfully entertaining style. Brands’s facts are every bit as engaging as McMurtry’s fiction, illuminating and spotlighting our forebears and the clash of cultures that took place leading up to the forming of the republic and, ultimately, the state.

Lastly, I have added a new element to an already heaping project. I have applied for the David Buschow Memorial Scholarship to attend a Boulder Outdoor Survival School Field Course. The BOSS staff trains participants to survive in the desert. The course is intended to be rigorous, mentally as well as physically challenging. It lasts twenty-eight days, and by the end, participants are expected to have a fundamental grasp of how to survive in the middle of nowhere. Water location, campsite location, and fire making are part of it, but the tougher part, working through “the wall” of your fatigue, hiking fifteen to thirty miles with little food and water, and figuring out just how to make things work, either makes or breaks its participants.

I’ll hear back from BOSS toward the end of February. In the meantime, I’ve trying to improve my physical health. One of the things BOSS grades you on before starting is the Cooper 1.5-Mile Running Test. After a few trials, I have fallen comfortably within the “Good” range for 30 to 39 year olds. (I can’t believe I’m in the 30 to 39 bracket!) I’m also doing push-ups, crunches, sit-ups, and stretching, as well as jumping rope and hiking. The exercise feels good.

There is much that remains to be done, and I will continue to update periodically to let you know where I am. For the moment, that’s all from the preparatory side of the Texas Perimeter Hike.

Until next time, travelers… stay tuned.

This is NOT Texas!

As the title might have clued you in, none of these shots are of Texas. They are of Montana where my partner Annie and I are currently living. There has been snow on the ground for many weeks, and while the temperature has gotten above 40 degrees this week, I am still stinging from the negatives a few weeks back. 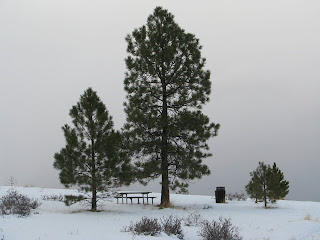 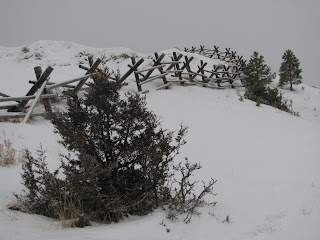 Lately, I have been taking photos on a regular basis in an effort to improve my photography. I was speaking with the Travel Editor of the San Antonio Express-News and the Houston Chronicle about running my column, and the editor made it clear to me that my photography had to be as good if not better than my writing. She explained to me that many writers don't have good photos to back up their written work. As I am an amateur photographer, I have become serious about getting better at this visual art form. 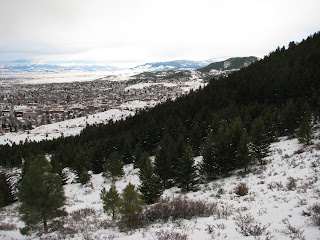 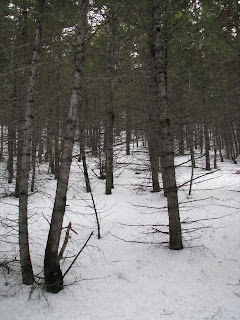 Based on her suggestions, I started checking out books about photography, learning about composition, lighting, how to get what you want from a photo, how to focus on a subject, lines, and a host of other qualities of good photography. It's overwhelming, but luckily, I quickly discovered P, which is automatically finding available light for decent shots. So I am focusing on composition and balance in my work. What you see before you are some of my first conscientious attempts at real photography. 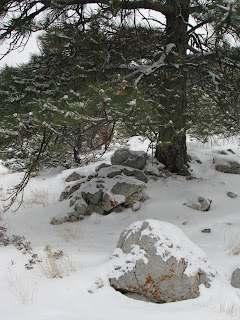 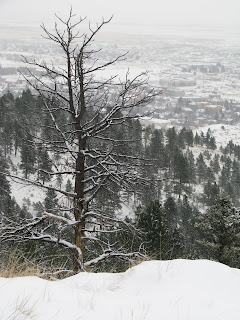 All of these shots are from hikes into the mountains surrounding Helena, Montana. Trees are abundant in my frames, but I'm also trying to focus on other objects and the depth these images can create.

Several of these shots were taken in relatively shallow snow, perhaps a few inches, but the one with the long fence was taken in a couple of feet of snow! Annie and I have usually gone out together on these photo outings. She has been patient and supportive of this fervent desire to get better at photography, going so far as to hike miles and mountains, all the while stopping several times for shots, sometimes in the space of a few yards. If you think it's been easy for her, then take a look at t 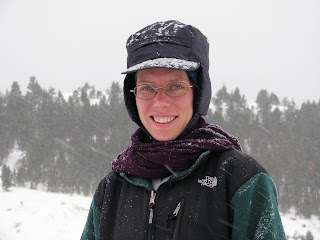 his next photo. She had to go for grumpy- old-man chic to withstand the temperature, but at least she looks like she's having a good time. The blurs in the photo are falling snowflakes, and the trees in the background really did look like that because of our limited visibility. This shot was taken on January 1, 2009. It's hard to imagine a nicer way to spend the first day of the new year.

Until next time, adventurers, stay warm, stay happy, and stay tuned.
Posted by Smatt at 7:26 PM No comments: