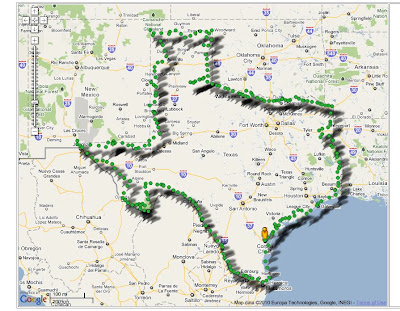 .
This map has been LOOOONG overdue. All the green dots are where I either camped, stayed in a hotel/motel/someone's house, or stopped for the day (and didn't sleep there). You can see the places I went slowly and the places I went fast. I think the biggest stretches I covered were in the last push to Corpus.
.
It's wild to see the map of the trek. Of course, I'd been updating along the way and regarding it, but somehow seeing it all together like this is a different experience.
.
While I have forgotten a handful of my campsites, I remember so many of them vividly, which side of the road I was on, how high the grass was, the temperature of the evening. I don't remember even a quarter of my camping spots on the Appalachian Trail.
.
So there you have it. Mission accomplished. What's next is in the making, so until then, follow your dreams.
Posted by Smatt at 7:11 AM 1 comment:

My final Caller-Times column is here. No further explanation is needed.
.
So I was wrong about this blog being done. I guess there's always more that can be written. A few days ago, I got a gig for 2011 with the Austin American-Statesman! So there you go.
.
Until whenever!
Posted by Smatt at 10:37 PM 1 comment:

Labels: in the news 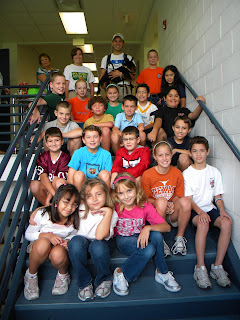 .
Throughout most of my hike, I corresponded with a group of fourth grade students at St. James Episcopal School. I sent postcards to Corpus, and on occasion, I'd receive a huge package of letters from the kids filled with questions about the hike and updates from their lives. This back-and-forth was one of the highlights of my trip.
.
I wrote about it as well in a Caller-Times article several months ago. You can read that here.
.
Their teacher was Mrs. Linda Stalmach. On the morning of my departure, my friend's mom Tommie Nattinger mentioned that Mrs. Stalmach had expressed interest in my project. I immediately said that I'd be more than happy to write the class, though I hadn't spoken with Mrs. Stalmach directly.
.
I wrote that very day. Then I wrote once or twice a week for the better part of a year. When they wrote a bunch of letters, I did my best to reply to every one of them.
.
Little did I know, Mrs. Stalmach was teaching her last year in a wheelchair. She had been diagnosed with ALS or Lou Gehrig's disease and had lost the use of her legs. This didn't keep her from doing a superlative job, though. More than one student mentioned that they had the greatest teacher on earth.
.
When I came back, the details of her condition came to me bit by bit. I was going through my own wind-down, and on top of that, I didn't think it wise to go over without permission. I had asked a couple of times through postcards if she'd like to meet. By that time, however, she had lost a lot of weight and was having trouble breathing, let alone writing.
.
I was oblivious to her rapid decline. Instead, I said yes to a classroom visit at St. James. I'd been excited to see the kids and see what they were like.
.
The talk went well. The kids asked a lot of questions, played with Raisin, and tried on my backpack (some fell backward, though many stood straight). Afterward, we took a group picture, shown above. It was a lovely way to start the day.
.
The teachers and admin employees informed me that Mrs. Stalmach was doing extremely poorly. They encouraged me to call and go over. So I did.
.
After getting the number from Tommie, I called and was given the OK by John Stalmach. I asked my friend's mom to accompany me, and she accepted. As we were driving over, she tried to prepare me for what was coming, but really, nothing short of direct experience will give you what you need to know.
.
My former teacher had disappeared. In her place was a much smaller woman, sitting in a wheelchair, whose arms and hands moved slowly, whose voice was barely a whisper. We both gave her awkward hugs.
.
Tommie lead the conversation, talking about whatever snippets she could discern from Mrs. Stalmach. There were times when it was clear Mrs. Stalmach was a little confused, not responding to our prompts or muddling up what we'd just said.
.
However, in these difficult moments, Mrs. Stalmach asked if I had seen the kids. We had told her earlier in the visit that I had, but in the haze of her condition, she hadn't understood. But now she was asking. She was dying, could barely talk or understand, and was still thinking about her students.
.
Mrs. Linda Stalmach died the following day.
.
It's been my privilege to have worked with Mrs. Stalmach and to have been a part of her last year of teaching. She will be missed by everyone.
Posted by Smatt at 9:51 PM 5 comments: