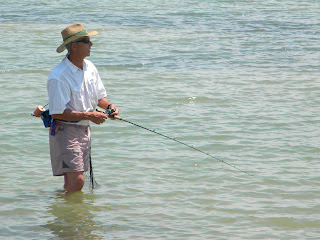 "It's relaxing. That's the important thing."
- Dick Green on not catching anything.
(To be fair, he had just started.)
Fulton, TX
. . . 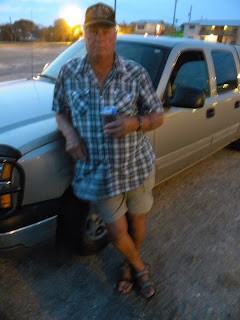 "I set the record in 1976. Of course,
it's been broken many times since then."
- Butch Hodges on his performance
in the Texas Water Safari,
a month-long, muscle-powered water contest
from San Marcos, TX to Seadrift, TX,
billed as the 'World's Toughest Boat Race.'
Seadrift, TX
. . . 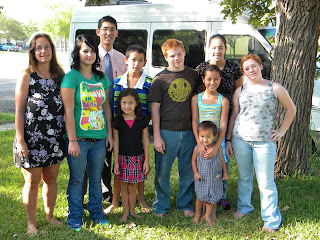 "Bless him on his journey,
and keep him out of harm's way.
In Jesus' name we pray. Amen."
- Betsy Lee in a group prayer
for my protection on the hike
(Betsy is on the far left,
followed by Sonya, John, Ben,
Sophie, Charles, Brayson,
Madeline, Elijah, and Mary).
The Lee family graciously hosted me
for two days.
Port Lavaca, TX
. . . 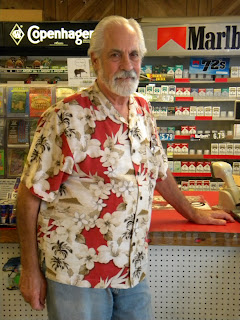 "The general economy is soft, but right here,
we're doing real good."
- Jerry Lawrence on the state of his business
'Fuzzy's One Stop,'
casually redubbed 'Fuzzy's Fun Stop.'
The grill and cook, not pictured,
made a superb burger
that satisfied this hungry hiker.
Hwy 35, near Palacios, TX
. . . 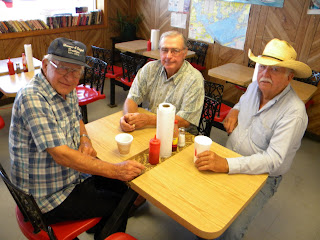 "Five dollars a day."
- Robert Peterson, pictured far right, of his 1950 paycheck
on Moody Ranch, while chatting with local friends at Fuzzy's
(Walter T. Krause, retired farmer and rancher on left, and
A.B. Massoletti, retired ALCOA employee in middle).
This statement was followed by a wide grin.
Hwy 35, near Palacios, TX

I just found your blog after reading your article in the Vernon Daily Record. I live overseas, but miss my home state dearly. I am looking forward to reading about your adventures, especially when you get to North Texas! Best of luck and enjoy the ride!

Welcome aboard! I hurt my foot but will be back in action in a couple of days. Keep reading!