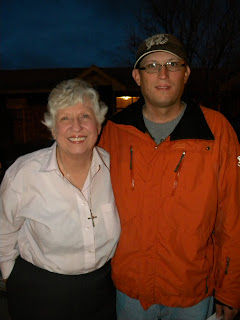 "I'm going to be your mom for a minute. Go sleep at Annette's place."
.
- Magann Rennels, and her son Gil, giving advice to me in the evening. Magann and Gil run a local news program and were tipped off by Annette Orozco that I had come to town. They came by and did a quick five minute interview. Magann didn't use notes, yet her questions came rapid fire. At the end, she still made a minute to be my mom.
.
Muleshoe, Texas
. . .
. . . 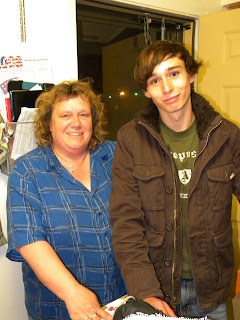 "I told Roper to come over for an interview, and he said, 'But I won't miss any school for this.'"
.
- Terry Brewster of the Muleshoe Journal, pictured with Roper Kerby, a high schooler, on being shadowed by a student. The interview (arranged by Annette below) occurred during the evening, outside of school hours, so Roper had to sacrifice his own time. The pair were a fun team and the only double interview of my entire trip.
.
Muleshoe, Texas
. . .
. . . 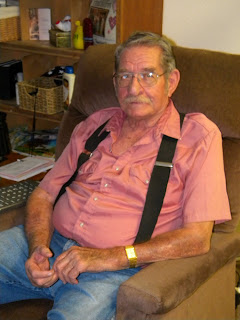 "Everybody else has internet. We have An-nette."
.
- Cliff Crabtree on the interconnectedness of the family. Cliff's sister Joyce is the one that arranged our meeting. She called Annette who organized dinner and everything else and told all the key players. Cliff's remark was right on, but he also had a great sense of humor. On the day I left, he drove out ten miles to see how I was doing. He stopped smack in the middle of the road, partway on both sides, and we had ourselves a conversation. Without even trying, he was making me smile.
.
Muleshoe, Texas
. . .
. . . 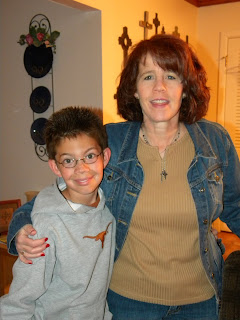 "He came up to me before bed and asked, 'Mom, could you learn how to play chess?'"
.
Annette Orozco, pictured with son Reese, on her son's interest in chess. Annette and her husband Rudy invited me to couchsurf at their house before I continued hiking in the morning. I gave Reese his first chess lesson and later told Annette how well he did. Already calculating that he needed a chess partner, Reese roped his mom in before going to bed.
.
Muleshoe, Texas
. . .
. . . 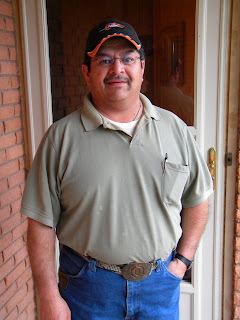 "You ever heard a rattlesnake scream?"
.
- Rudy Orozco on his extreme encounter with a rattler. Rudy and Cliff were riling me up with rattlesnake tales, but this one was different. Rudy had been out on a hike with his son Reese and had stepped around the edge of a rock. He unwittingly stepped right on a snake, which then screamed. Rudy had stepped far enough up on the snake that the reptile couldn't reach back to bite him, though it repeatedly tried. He pivoted, took one big step with his other foot, and ran.
.
Muleshoe, Texas
. . .
. . . 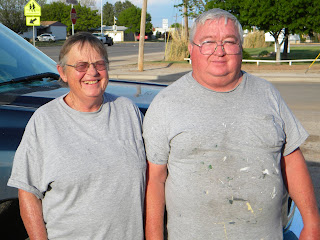 "Get over here, Mary Jane. He wants something he can throw sticks at."
.
- Red Ryder, pictured with wife Mary Jane, on the photo I was about to take of them. I met the couple and their daughter Leona at Meme's restaurant in Denver City. We talked the entire meal, of Red's West Virginia origins, of Leona's music degree and subsequent year on the east coast trying to jumpstart a career. I enjoyed their descriptions of east coast life, relating to the Texan point of view entirely. Though this was not the most profound thing Red said, it made me laugh and put me in a good mood for days.
.
Denver City, Texas
. . .
. . . 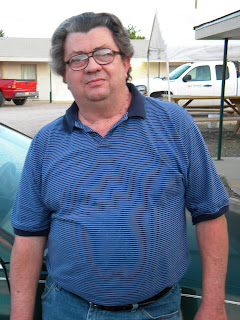 "People that ask that don't understand what you're doing."
.
- John Reed, owner and operator of The Winkler Post, the area's online news source (http://winklerpost.com/), on the question 'What have you learned?' John and I had a great conversation and interview, and when it came to a close, I mentioned that several interviewers had asked me what I had learned. He took offense to the question. John later met me in Orla and informed me that he had left three quarts of water along my path. His interest in and comprehension of my project made him a real pleasure to work with.
.
Kermit, Texas
. . .
. . . 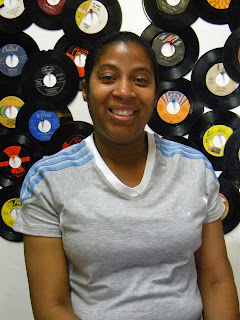 "The barbecue is my life; the kids is my joy."
.
- Christine, owner of Christine's Blues-N-BBQ, on work and family. I had the pleasure of meeting Christine and her partner Thomas (he doesn't do pictures) while eating at the family business. Thomas handled the barbecue preparation while Christine did customer service. The records and album covers hanging up all over the restaurant belonged to Thomas who took the time to tell me about the music he grew up with and its history. Then Christine told me about their three kids and seven grandbabies. They're not babies anymore, corrected Thomas. Christine agreed, but you could tell, she still thought of them as her babies.
.
Kermit, Texas
. . .
. . . 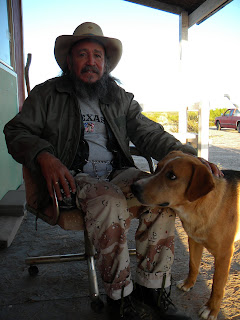 "There's not a coyote, rabbit, or rattlesnake that moves that I don't know about."
.
- Ben Klein, a retired navy medic, on the happenings in the area. Ben lives by himself on a long stretch of desert between Mentone and Orla and runs a little shop he calls K&K. I stopped by his shop of odds and ends, looked at the hundreds of signatures that visitors had left on the porch of the building, and perused his used books, models, and trinkets. Ben liked to say he knew everyone for fifty miles around. Before nightfall, we checked up on a driver whose vehicle had broken down not far from K&K. He and the tower were a little surprised to see us, but Ben treated them like they were old friends.
.
Hwy 285, Texas
. . .
. . . 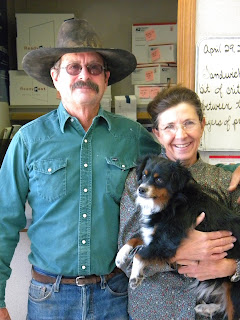 "That is a good man."
.
- Jeanette Scott, postmaster of Orla, on her husband Ronnie. When Jeanette showed up to the post office in the morning, I was already there. She screamed. Jeanette quickly realized who I was (she had been receiving mail for me for some time), and she and I had a running conversation throughout the day. Jeanette introduced me to every customer that came in, told me about her family, recounted the loss of a daughter, asked about my trip. She also called her husband and asked him to bring me a couple of cedar posts for walking sticks, which he did. A quiet man, Ronnie asked just enough to be polite, then headed off to work. Jeanette watched the door close and spoke as much to me as to herself when she said the words above. It was my favorite moment of the morning.
.
Orla, Texas
. . .
. . . 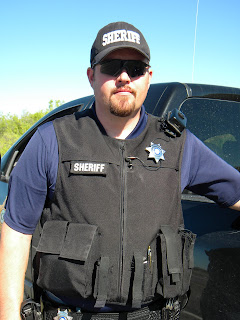 "That's a Texas Horned Toad. We used to play with them as kids."
.
- Deputy Sheriff Chris of Mentone on an unidentified picture I showed him on my camera. I had met Chris just as I was leaving Mentone, and he hooked me up with internet at the courthouse and let me stay the night there, too. (Locals later told me that thought he was locking me up.) When I saw Chris this day, I was just past Orla (about 30 miles from Mentone), and he was checking up on me. When I asked about the picture, he told me that he and his friends used to stage massive battles with little green army men, then introduce a Texas Horned Toad as an attacking dinosaur. He hadn't seen one in a long time.
.
Ranch Road 652, Texas
. . .
. . . 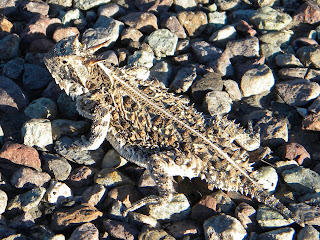 "But I don't wanna be the dinosaur!"
.
- The Texas Horned Toad (or Lizard) on playing war with little boys. Though I didn't touch it or place it amidst several platoons of green army men, I later read that when threatened the Texas Horned Toad can squirt blood out of the corners of its eyes or mouth up to five feet away.
.
Ranch Road 652, Texas
. . .
. . . 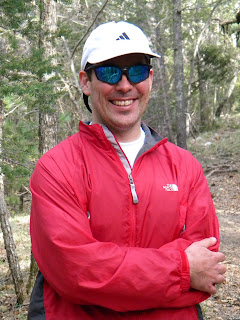 "Everyone I know who has stuck with what they wanted to do -- art, music, writing, etc. -- is doing it."
.
- Kevin Wass, Associate Professor of Music at Texas Tech University, on staying true to your dreams. I met Kevin at the Tejas Campground on the Tejas Trail at Guadalupe Mountains National Park. He explained that he had gotten his Doctorate of Music Arts with a specialization in the tuba. All sorts of people tried to dissuade him, but with support from his wife and mother, Kevin went back to school for a degree that would qualify him for one of about sixty positions across the United States. After graduation, he got one of them.
.
Guadalupe Mountains National Park, Texas
. . .
. . .
Posted by Smatt at 10:23 AM