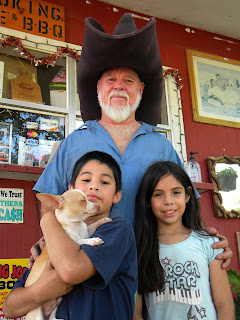 "Well, there's me, my wife, my son, my daughter. Four."
.
- Joe Martinez, owner and operator of Smoking Joe's BBQ, on the population of El Zacatal. I met 75% of the community on a hot, humid South Texas day. The kids and the family's several dogs were playing in a boat while Joe was working his barbeque stand. I hadn't really considered getting anything hot, but Joe was a friendly, talkative salesperson who convinced me to go for a brisket sandwich. While I ate my mouthwatering meal, we chatted, and I found that his children are the family's fourth generation at that very location. Joe told me that there were supposedly three wagons of gold buried somewhere on his property, a treasure tale passed down from the early days of El Zacatal. He smiled and assured me that he hadn't spent any time looking for them. "This is my gold mine," he said, gesturing to his barbeque wagon. After watching several customers come and go and polishing off my own sandwich, I knew he wasn't exaggerating.
.
El Zacatal (east of Progreso), Texas
. . .
. . . 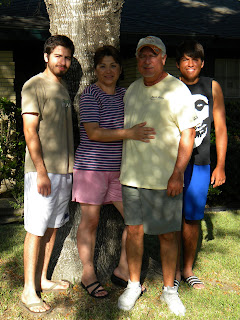 "I'm blessed to have a great wife, wonderful sons, and a job in which I've accomplished most of my career goals."

.
- Dr. Manual Medrano, standing next to his wife Chavela and sons Estevan (left) and Daniel (right), on a life lived almost entirely in the Rio Grande Valley. A history professor at the University of Texas at Brownsville, Dr. Medrano was kind enough to open his doors to me and give me a tour of campus and town. His knowledge of the area was vast, and he seemed familiar with just about every subject I could think to talk about. Aside from teaching at the university, Dr. Medrano has also published half a dozen books in ten years, the most recent about friend and colleague Americo Paredes. When I asked him if Brownsville had treated him well, he was quick to cite family as his first proof, then his job as his second. It's a telling detail. As many hours as Dr. Medrano has put into his career, he defines himself first and foremost as a husband and father, as someone surrounded by love.
.
Brownsville, Texas
. . .
. . . 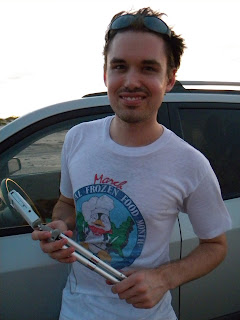 "Anyone can put themselves out there, but you have to make a special effort to stand out against the crowd."
.
- Producer/Reporter/Cameraman Joseph Fenity on the competition in his field. Based out of Austin, Joseph has worked in broadcasting since he was a teen. He contacted me several months back, and during the hike, he interviewed me twice by phone. Determined to get video footage, he drove down to South Padre and met me going north. Armed with an assortment of gadgets, Joseph managed to get over an hour's worth of footage and audio. He is in the process of creating the first few episodes of a homegrown news program, due out in September, and is excited about starting something different. His attitude was pure positivity and optimism. He added, "Hey, if Oprah can do it, why can't I?"
.
South Padre Island, Texas
. . .
. . . 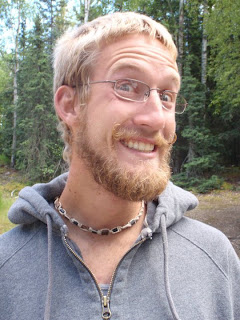 - Jordan Thompson on his former girlfriend's inability to break up in a timely manner. A recent college grad traveling the country from temp job to temp job, Jordan took one look at me and Raisin at the Padre Island National Seashore Headquarters and knew that we were hurting. Though he saw us eating, he offered up the second half of his own meal. When I declined, he offered up his story which I gladly accepted. We spent the next few hours in happy conversation, trading backgrounds and girlfriend woes. In the above story, he mentioned how his girlfriend had traveled abroad to study and how he had remained faithful during the six months apart. In the final month, she broke off the relationship, leaving Jordan feeling like he'd just got back from a five-and-a-half month visit to the cleaners. He made light of it, though, and what's more, it made for a good lesson in life.