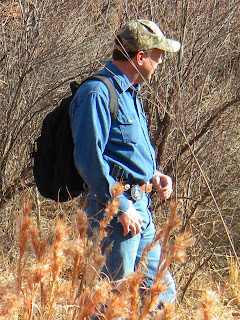 "These are the kinds of hikes I like, the ones where you get off the beaten path."
.
- Donald Beard, Manager of Caprock Canyons State Park & Trailway, commenting on the joys of bushwhacking. Donald, park host Dave Foley, and I meandered through the Holmes Creek Canyon for several hours, spying wild pigs, deer, and several birds. Not normally encouraged, the off-trail hike was considered official business.
.
Quitaque, Texas
. . .
. . . 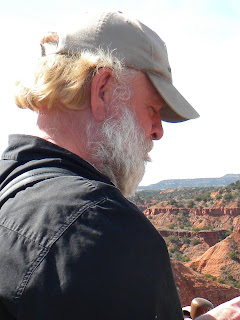 "The open road."
.
- Dave Foley, Caprock Canyons State Park Host and Volunteer, on his upcoming plans. Dave's been hosting at the park for approximately 9 months now. When campers have immediate concerns, he's the go-to guy. He loves the hikes, the views, and the pure air, but he's been feeling the itch to hit the road. Dave doesn't know where he's going yet, but I believe he has a plan nonetheless. When he says "the open road," he almost bellows it, hitting his high on the word "open," coming down again on "road." He repeats it again when we hit a lull in our conversation. It's a three-word song that fills the silence.
.
Quitaque, Texas
. . .
. . . 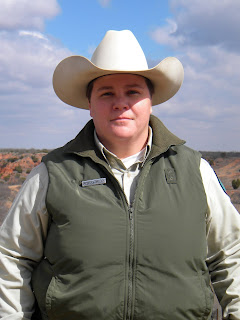 "My dad's family had a trooper in Colonel Mackenzie's army in the Battle of Palo Duro Canyon, and my mom's family had a member in the village that was attacked."
.
- Rebecca Miller, Caprock Canyons State Park Ranger, on her family's history in the region. Before serving at Caprock Canyons, Rebecca put in a few years at Palo Duro but eventually left for this quieter setting. "We're more of a family here," she tells me of the staff, "because we have the time to be." In a land her distant relatives had once claimed as their own, Rebecca sees herself, until the end of her days.
.
Quitaque, Texas
. . .
. . . 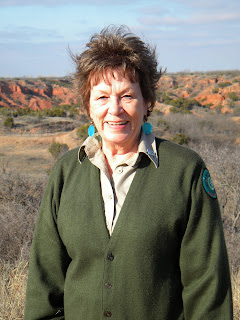 "My mother is almost 99 years old. She still has a garden and works the yard. She still mows the lawn."
.
- Joyce Price, Caprock Canyons State Park Clerk, on her mother's health. Joyce moved back to the area to be close to her mother in her old age, but acknowledges that her mother has been living the same way her entire life. Joyce found the clerk job a few years ago, which was almost too good to be true, jobs being hard come to by in this part of the state, and prides herself that she beat out the competition at age 68. It appears that the work ethic didn't fall too far from the tree.
.
Quitaque, Texas
. . .
. . .
Posted by Smatt at 12:52 PM

This article sort of makes me homesick. I was born and raised in Quitaque. Glad folks are still enjoying it. I went to the area where the park is several times with my uncle, Jim Stroup. Tell everyone hello for me.
Monte Wise

Thanks, Monte. I'll pass that on.

A great resource for people from the area has been the Caprock Canyons State Park Facebook page. People from Quitaque are reconnecting with old friends via the page and looking for others.

Thanks again for writing.