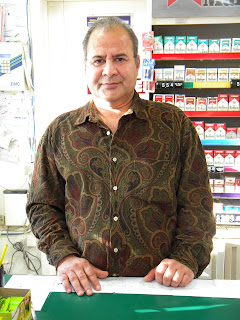 "One second. My whole life changed."
.
- Abdul Saleem, owner of a convenience store called The Panther Pit, talking about the death of his son. Abdul had had a successful wholesale business in Pakistan but left everything behind when a local doctor told him his son needed treatment outside of the country. He brought his son to the United States for medical treatment, but shortly after arriving his son died. With a few thousand dollars in pocket money, he remade his life here, refusing to return to a country and a life that would remind him of his son.
.
Saint Jo, Texas
. . .
. . . 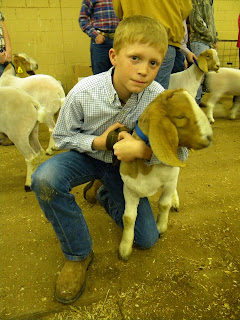 "It's mainly just remembering to feed him and run him on the weekends."
.
- Twelve-year-old Austyn J., a Clay County Junior Livestock Show 2nd & 3rd place winner, on the secret of his success. I ran into Austyn in the animal corral section which was situated behind a large auditorium filled with people. He was in line to show his animal up front where locals and business owners would bid a premium on the animals, the proceeds of which went directly to the animal raiser.
.
Henrietta, Texas
. . .
. . . 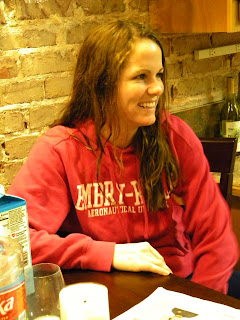 "That's him! The guy on the front page of the paper!"

.
- Couchsurfing host Katrina Morgan pointing me out to other customers in a convenience store. Katrina and her roommate hosted me for two days, introducing me to friends and giving me much-appreciated access to a computer. When I learned that a local interview had been published, Katrina and I went to a nearby store to pick up a copy. Katrina's excitement at seeing the story on the front page rose to an unanticipated level.
.
Wichita Falls, Texas 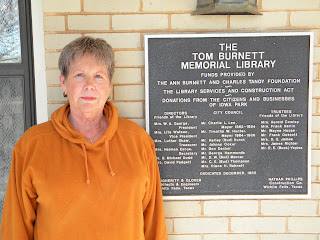 "I came here as a little girl with my father. I remember thinking how much fun it would be to rollerskate on the second floor. For some reason he didn't think too much of my idea."
.

- Gayle Cleghorn, library assistant at the Tom Burnett Memorial Library in Iowa Park, on an early experience with the building. The library is a beautiful two-story renovated home in the center of an entire city block sharing the land with only two other buildings, all of which had belonged to Tom Burnett. The building was later donated to the city for the explicit purpose of being the library.
. 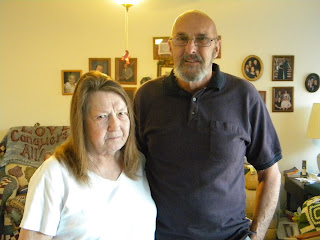 "I had my husband dig out the barbecue pit from the snow and set it up in the laundry room, so I could make Christmas Eve supper."
.
- Ardis Jensen with husband Roger on how they handled the blizzard that hit North Texas around Christmas 2009. The snow came down so heavily it eventually led authorities to close down a stretch of the highway. Many travelers had to spend the night in their vehicles, arriving on or after Christmas to their destinations. Several inches came down and power went down in parts of the entire Wichita Falls and surrounding area. Undeterred, Ardis employed a very Texan solution to address the problem.
.
Iowa Park, Texas
. . .
. . . 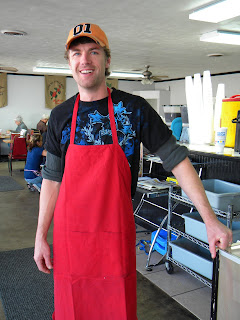 "I thought it'd be real casual. Maybe a customer or two.
I'd make their food. We'd talk."
.
- Kerry Pruitt, owner of K&R Kitchen in Quanah, on his expectations before the business opened. Both he and his dad were laid off from the oil industry and decided to try their chances in food service. On the first day, there were so many people that the wait was upwards of an hour. Kerry and his family treated me to a steak dinner after they heard I was passing through town. It was the best steak I've ever had. The restaurant was busy, and I watched Kerry bouncing from table to table like the General Lee on the dirt roads of Hazzard. What's more, he still made time to talk.
.
Quanah, Texas
. . .
. . . 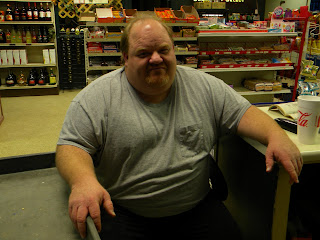 "Every town is 30 miles away. It's the distance a wagon could do in a day.
At least, that's what the old-timers say."
.
- William Reece Manuel, convenience store owner, on the layout of the land. When I first came in, he said, "It's our highway skier," a reference to my use of hiking sticks. Right off, Reece told me that he wasn't put off by my pack and that he knew I was out here hiking on purpose. This understanding gave way to a great conversation that ranged from the local economy to local history. We chatted for over an hour.
.
Estelline, Texas
. . .
. . . 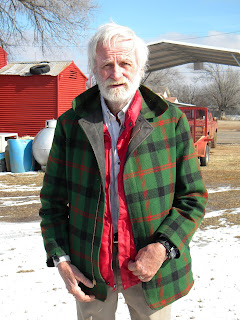 "We're as local as you can get."
.
- Dale Redd, owner of the This "N" That convenience store, to me when I expressed an interest in shopping local. His store contained a wide variety of things from glass collectibles to hot Mexican candy. I bought graham crackers.
.
Turkey, Texas
. . .
. . . 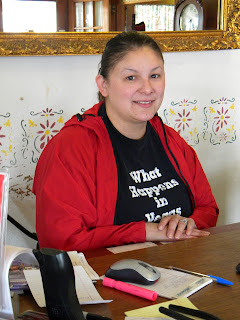 "Here, everybody knows everybody, and they all look out for each other. That's why we stayed."
.
- Marsha Valdez, manager of the Turkey Hotel, on the advantages of small town life. I stayed at the hotel which was built in 1927 and hung out mainly with her father-in-law Albert who sent me on my way back to the Caprock Canyons Trailway with a sack lunch of biscuits, sausage, and bacon.
.
Turkey, Texas
. . .
. . . 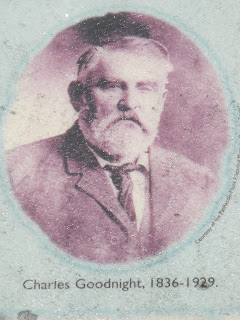 "People have asked me about encounters with wolves and what it is really like, and I have answered honestly that it is an unique experience but the sort of thing that gets less surprising each time."
.
- Charles Goodnight on his experiences in the wild. Often referred to as the "father of the Texas Panhandle," he was a legend in his own time and the inspiration for Captain Call in Lonesome Dove. Goodnight managed the JA Ranch, part of which later became Caprock Canyons State Park.
.
Quitaque, Texas
. . .
. . .
Posted by Smatt at 6:36 PM

Fascinating...all. I thoroughly enjoyed it.

Dear S. Matt Read,
I apologize for constantly calling you for scheduling an interview with you. Unfortunately, I will not be able to meet you this week because I don't have a photographer to go with me. I noticed that you will be passing through Plains, TX, on your hike. Perhaps, I can meet you when you get there since it is closer to Lubbock. Again, thank you for your understanding. If you need to reach me, call me at 808-398-5983.
Thanks,
Alyssa Dizon
Lubbock Avalanche-Journal