Books on the Edge

Don't be surprised here by the number of books. One's a comic book, another is really short, and I'm not yet done with the last one (but I'm getting there). There is a wide variety of genre and subject matter represented, and I like it that way. Enjoy.
. . .
. . . 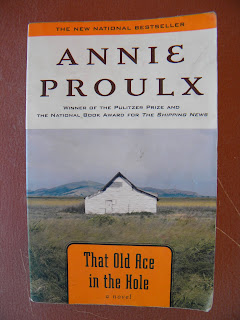 That Old Ace in the Hole by Annie Proulx was, to be brutally honest, a letdown. Her story takes us into the heart of the Texas Panhandle, a region that I thoroughly enjoyed on my trip, but doesn't quite touch the real beauty of the place. I recognized several names from the Acknowledgments, and that was exciting. But it was all pretty much downhill from there.
.
Bob Dollar is paid to investigate potential sites for hogfarms, on behalf of a big corporation, in the panhandle of Texas. It doesn't sound like much of a plot (and it's not), but that's not the problem. Bob is unbelievable, a paper thin shell of a character, who never really makes the reader gave a darn about what happens to him.
.
The novel is propelled primarily by speech, and I smiled more than once at the way people talked. If Proulx did one thing right, it was in imitating the cadence and word choice of people in the region, but this skill does not and cannot hold the book up. Lovers of the panhandle might find some comfort in her talent, but they will have to dig much deeper to enjoy other aspects of the story.
.
Enough. The panhandle deserves a great book about its hardy population. This book is not it.
. . .
. . . 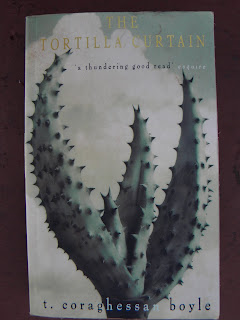 The Tortilla Curtain by T. Coraghessan Boyle is a fast-paced and enjoyable look at illegal immigration through the eyes of an upper-middle class family in California and a dirt-poor Mexican couple who just illegally immigrated to the same area.
.
There is no plot, per se. Events keep happening to each family which both directly and indirectly combine their fates. A California man accidentally hits the Mexican man with his car. Thus starts a whirlwind of related events, both understandable and tragic, distinct yet interconnected. Each man negotiates the ups and downs of his individual life, grappling with prejudice against the other and the injustices of life.
.
Boyle tears into the American family with sarcastic and searing remarks, and while it made me laugh, it also seemed a little unfair. He treats the Mexican family much gentler, tries hard to make them seem normal and hardworking, which they are. But the presence of judgment against the California residents and the absence of judgment against the illegal migrant workers is highly noticeable. There are a few nasty Mexican characters, yes, but it isn't judgment. Boyle mocks his white characters and their hardships while seeming to protect his Hispanic characters from the same narrative injustice.
.
I'd definitely recommend this book. Sure, a plotline was left unfinished, the ending is more poetic than final, but the story reads like a thriller. I couldn't put it down (not that I had a table) and laughed out loud many, many times. The author's prose is crystal clear, his pacing enjoyable, and as per the discrepancy between how he treats his characters, well, that's his choice.
. . .
. . . 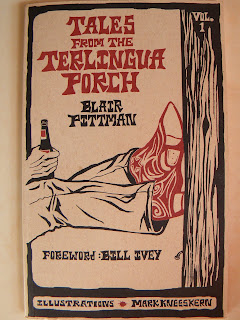 Tales from the Terlingua Porch by Blair Pittman is a collection of stories, maybe a lot of hot air, from the many, many characters who visit the Terlingua Porch season after season. I read this book in an afternoon and was charmed by some of its informal tales. Pittman isn't J. Frank Dobie (who is?), but you get the feel for what people talk about in Terlingua Ghost Town. You might even learn a thing or two about life. There's a Part II, as well, if you can't get enough.
. . .
. . . 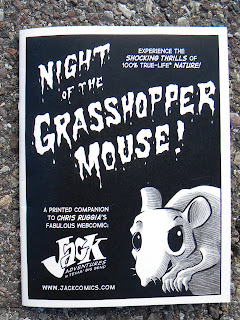 Night of the Grasshopper Mouse! by Chris Ruggia is a short, interesting comic about an aberration of nature, the cruel and unusual grasshopper mouse. Unbeknownst to me, a very small portion of mice turn into meat-eaters and attack their own kin. The comic details one such tale. This little story doesn't really target adults, but I think older elementary kids would like it.
. . .
. . .

Coyotes by Ted Conover is a first-person account of the trials of Mexican migrants crossing the border and finding work in the United States. Conover's tales are not information heavy, but they are fascinating nonetheless. He travels to Mexico and crosses multiple times as one of the millions who do so illegally every year, using coyotes and later experimenting with the coyote lifestyle himself (briefly, I might add). He makes friends, slaves away in orchards, crosses the USA in the worst kind of vehicles, and documents all the little details along the way. He was very sympathetic to his Mexican friends back in the 80s when he wrote this book and still seems very much on the side of the men and women who just want to make a living, even if that means breaking the law. Like Boyle does in fiction, Conover puts a human face on these individuals, which to me far outweighs any bias he may have imposed on the telling of his tales. A good read.
.
(Notice the cover, by the way. This book got completely soaked in Big Bend.)
. . .
. . . 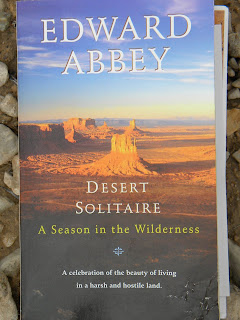 Desert Solitaire by Edward Abbey chronicles his six-month stay in Arches National Monument. I'm not actually done with this book, but I've read enough to comment a bit. Abbey is a hardnose environmentalist who admires nature and all its harshness and glory and relates more to the past than to the realities of today. It's a wonderful read (that is, full of wonder). What I like about Abbey is what Republicans liked about George W. Bush: he makes a statement or opinion and then defends it until the end of his life. (The Democrats could stand to learn a thing or two from this kind of hardlined perspective.) Abbey rips into the National Park Service, the condition of the modern Native American and cattleman, and even into his own capacity for hard work. If you want to read a book by someone who fiercely loves life and nature, who doesn't cower when he has to give a difficult-to-hear opinion, who represents much of the aggression that the rest of us lack, then pick up Desert Solitaire.
.
(Notice this cover, too. On one particularly feisty night, Raisin got her teeth into this one.)
. . .
. . .
Enjoy! Until next time...
Posted by Smatt at 12:23 PM

Labels: books on the edge