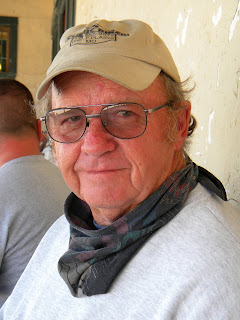 "It was 40 miles of tarantulas. I've never seen anything like it."
.
- Robert H. Lee on riding a motorcycle in West Texas after a heavy rain. I met Robert on the Terlingua porch in the middle of one of his motorcycle roadtrips. Originally from Texas, he told of a heavy rain that slowed down a bike trip for him and his buddies. When they finally resumed the ride, they discovered that the road from Presidio to Marfa was inundated with tarantulas trying to stay away from the heavy water. With nowhere to go but onward, they drove the spider-filled road for an hour, covering their wheels with a thick layer of smelly arachnid guts.
.
Terlingua Ghost Town, Texas
. . .
. . . 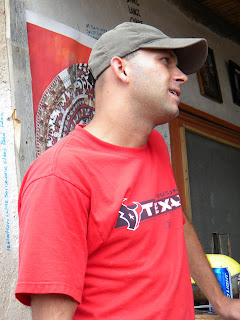 "I still log on about six hours a month, say hi to people, shoot some fireballs, gain some experience, whatever."
.
- Brian Alexander on his post-"everything's about my on-line adventure game" life. I met Brian at the La Loma del Chivo hostel in Marathon while he was visiting his friend Ali. We worked together building a goat shed, volunteered for the fire department chief, judged the chili cook-off. After my week there, Brian walked with me for a few miles and talked about his former intense obsession with Everquest, an on-line adventure game. He was years into it when he realized that it might be better to branch out. His visit to Marathon only served to reinforce the decision he had made several years prior, but he still makes time to dish out the occasional fireball.
.
Marathon, Texas
. . .
. . . 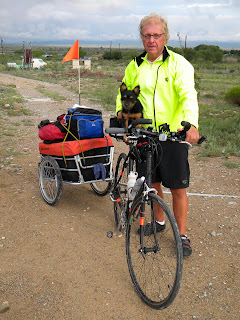 "So is this some kind of free-loving hippy place?"
.
- Dan, a cross-country bicyclist, on the hostel La Loma del Chivo. Dan only stayed one night in Marathon, but we had a couple of long conversations before calling it a day. He was recently out of a career, a marriage, and a subsequent relationship, and was literally rebuilding himself as he biked across America. Dan confessed that he had never experienced the kind of intensity of the road that allowed total strangers to become close in a relatively short period of time. When the hostel caretaker told him that bikers weren't required to pay, Dan couldn't believe it and spouted the above question. He followed that with, "Hey, this is all new to me."
.
Marathon, Texas
. . .
. . . 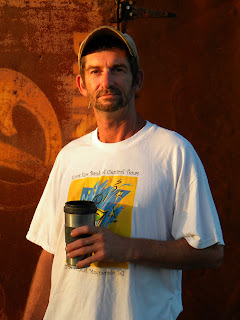 "From the courthouse [in Sanderson], the nearest traffic signal is 65 miles."
.
- Mike Millican on the remoteness of the entire region. I met Mike in Dryden over dinner at the grocery store (we were both invitees). His friends in Marfa had told him I was coming some time ago, so he wasn't surprised at all by my arrival and invited me to crash on his couch. During the evening and following morning, he told me about his plans to create a primitive bicycle campground, something that would break up a 150-mile stretch of Adventure Cycling's southern route. He even had a name picked out: El Escondido. With nothing in all directions, "The Hideout" seems like a perfect fit.
.
Dryden, Texas
. . .
. . . 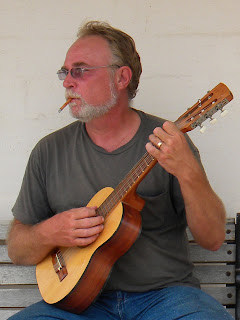 "When I'm here, you know they can't find anybody else."
.
- Keith Mann on working at the Lillie Langtry gift shop. Looking at the picture, it might not seem like Keith was working, but he most certainly was. Sitting comfortably on the porch and facing the not-so-busy Judge Roy Bean museum, he only went inside when there was a customer or two, which on this particular day happened at a rate of once per two hours. Keith lamented not being able to work on his porch on an overcast day, but there were moments playing his music when he didn't seem to mind. "This is my little Spanish guitar," he told me. Then he'd gently play another tune, looking off to see who might be blowing through his lonely West Texas town.
.
Langtry, Texas
. . .
. . . 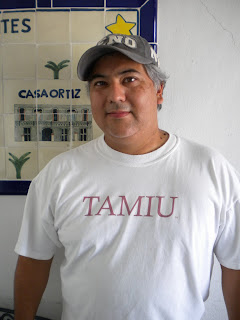 "My son said, 'Daddy, who's that girl over there in the purple dress?'"
.
- Jesse Gonzalez on his son's witnessing an apparition in his home. Jesse lives in Casa Ortiz, a historic house in downtown Laredo. One of the first questions I asked him was if it was haunted, and he answered 'yes.' Stories, we agreed, usually have a logical explanation, but there was no explaining his son seeing another person in an otherwise empty house. Jesse gave me and Becky Garcia a tour of the house, going through all the rooms with extra history thrown in for fun, but I didn't see any girls in purple and didn't feel the air go cold. Of course, I wasn't there at night.
.
Laredo, Texas
Posted by Smatt at 10:09 AM

Interesting people. West Texas is larger than life. Every time I've spent time there I enjoy the stories of people who have inhabit this part of the country.